We have years of experience caring for families from all walks of life, cultures and faiths. Our unsurpassed staff and our family provide kind, caring, professional service. Each family comes to us because they know we are leaders in our profession who are dedicated to excellence in service, adhere to the highest funeral industry standards, and have exceptional integrity. We consistently earn phenomenally high customer satisfaction survey results.

Our licensed, professional staff is here for you 24 hours a day, 7 days a week. Please call 1-406-745-6789 anytime. We will even come to you to make arrangements in the comfort of your home.

Prompt, compassionate service is always just a phone call away, where and when you need it. 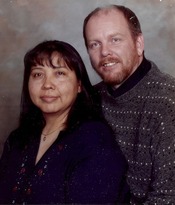 Married in 2004, Phyllis was born to Sophie Cullooyah Stasso & David Haynes and was raised locally only leaving to go to college before returning to the Reservation where she has been a Headstart Teacher for over 20 years.

She married a widower who came to the St. Ignatius area in 1996. Ralph was born in Missouri and raised in the High Plains Region and in New England before receiving his education at Ft Hays State Univ, KCKCC, KU Med and Friends University.  With a background in premed/chemistry and religion/ethics, he decided that he would rather be a mortician than a pathologist while in college and went to work in Plains, MT for the Shrider Funeral Home in 1984.  Since that time he has become a journeyman mortician working in Kansas City and Wichita, KS, Parsons FH of Anaconda & Philipsburg, MT and for K & L Mortuaries of southwest MT where he managed 7 funeral homes before moving to St. Ignatius where he was involved with the Riddle/Hunt Family Funeral Homes of Browning & St. Ignatius.

While at Riddle Hunt, Ralph ran the St. Ignatius Funeral Home with the option to purchase and he assisted the owners in Browning with operation of the facilities in Browning & Cut Bank because of Stanley Hunt’s battle with MS.  Sadly all three locations had to be closed due to medical bills and demands and the Hunt’s returned to Washington for medical care.  However, from this came the founding of Foster Funeral Home.

While both were raised in Native homes Phyllis was raised in a traditional home and Ralph wasn’t.  Phyllis & Ralph are active in cultural activities, Ralph as he learns them and Phyllis because she was raised with them.  Together they have raised two children Zachary who is now a pastry chef in New Orleans and Zane who has just finished his BA in Theatre Arts from Earlham College, in Richmond, Indiana.  Basically homebodies, they enjoy huckleberry & raspberry picking, gardening, going to auctions and powwows as well as traveling when the opportunity presents itself.

Members of the Haynes & Foster families

Being a family firm we have members of our family help around the funeral home when they can and there is a need for help.  This can be a brother in law, our children or nephews & nieces.

We as a family try to support each other whenever possible.  Phyllis and Ralph just appreciate them and their assistance.